Formed in 2018, Dream House Quartet fuses decades of musical mastery of classical and contemporary forms, featuring luminaries the Katia and Marielle Labèque on dueling pianos along with acclaimed composer-guitarists Bryce Dessner (The National) and David Chalmin (innocence, la terre invisible) performing radical new commissions from visionary composers and pivotal contemporary works of the last half century. They presented their first project in 2019 at Paris Philharmonie with guest Thom Yorke followed by a tour in Lyon, London and Hamburg Elb Philharmonie. The second half of this project was dedicated to the world premiere of Thom Yorke ’s composition « don’t fear the light » and a new song « gawpers ». Those pieces were Yorke’s first composition for Katia & Marielle and classical concerts halls . 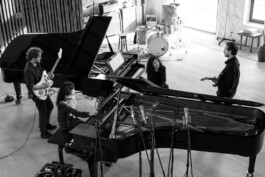 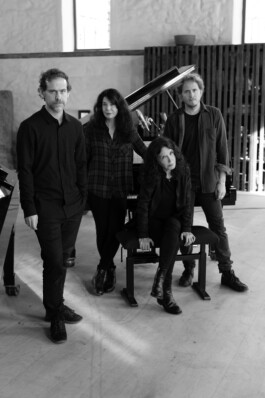 “They are immersing themselves in an increasingly youthful repertoire. The National’s Bryce Dessner (who recently wrote an entire album of music for them) and David Chalmin sit either side of the Labèques,. the Labèques provide atmospheric flourishes. It’s the kind of funereal meditation that would have fitted nicely on A Moon Shaped Pool.”
—THE GUARDIAN 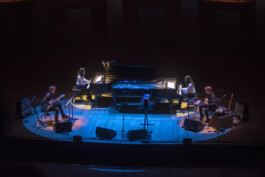 “electrifying pianists Katia and Marielle Labèque. played a suite of old and new compositions. Bryce Dessner’s “Haven,” jumpy and shrill, , with guitars that jittered up and down arpeggios, and pianos that promised redemption….The sisters played with monstrous energy...”
—PITCHFORK

“the quartet settled into a surprisingly accessible performance of light and shade, during which the pair playing propulsive chords on their grand pianos tended to out-rock the scratchy, sinuous guitars.”
—EVENING STANDARD 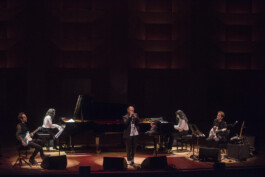 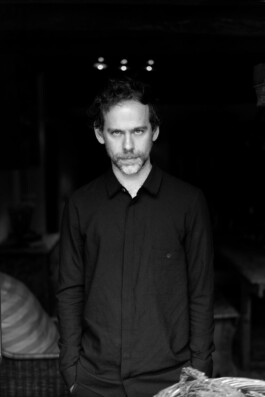 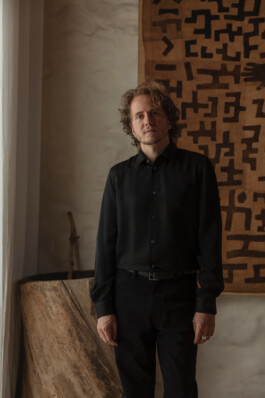 Bryce Dessner is a vital and rare force in new music. He has won Grammy Awards as a classical composer and with the band The National, of which he is founding member, guitarist, arranger, and co-principal songwriter. He is regularly commissioned to write for the world’s leading ensembles, from Orchestre de Paris to the Los Angeles Philharmonic, and is a high-proﬁle presence in ﬁlm score composition, with credits including The Revenant, for which he was Grammy and Golden Globe nominated, Fernando Mereilles’s The Two Popes and Mike Mill’s C’mon C’mon.
Dessner collaborates with some of today’s most creative and respected artists, including Philip Glass, Katia and Marielle Labèque, Paul Simon, Alejandro González Iñárritu, Sufjan Stevens, Fernando Mereilles, Thom Yorke, Bon Iver, Nico Muhly, and Steve Reich, who named Dessner “a major voice of his generation.” Dessner’s orchestrations can be heard on the latest albums of Paul Simon, Bon Iver and Taylor Swift.

In addition to his role as one of eight San Francisco Symphony Collaborative Partners, Bryce Dessner is currently Artist-in-Residence at London’s Southbank Centre and with Frankfurt Radio Symphony Orchestra. Major works include Concerto for Two Pianos premiered by Katia & Marielle Labèque, London Philharmonic Orchestra and recorded for Deutsche Grammophon; Violin Concerto premiered and performed internationally by Pekka Kuusisto, Trombone Concerto for Jorgen van Rijen commissioned by Dallas Symphony and l’Orchestre National d’Île de France; Voy a Dormir for mezzo soprano Kelley O’Connor and Orchestra of Saint Luke’s and the Los Angeles Chamber Orchestra; Skrik Trio for Steve Reich and Carnegie Hall; the ballet No Tomorrow co-written with Ragnar Kjartansson; Wires for Ensemble Intercontemporain; The Forest for large cello ensemble, Gautier Capuçon and Fondation Louis Vuitton; and Triptych (Eyes for One on Another), a major theatre piece integrating the photographs of Robert Mapplethorpe and premiered by Los Angeles Philharmonic. Dessner also scored the music - involving full orchestra and a 200-member choir - for the Louis Vuitton show at the Louvre in Paris as part of Paris Fashion Week 2020.

Dessner’s recordings include El Chan; St. Carolyn by the Sea (both Deutsche Grammophon); Aheym, commissioned by Kronos Quartet; Tenebre, an album of his works for string orchestra recorded by Germany’s Ensemble Resonanz and which won a 2019 Opus Klassik award and a Diapason d’Or; When we are inhuman with Bonnie ‘Prince’ Billy and Eighth Blackbird (2019) and Impermanence (2021) with the Australian String Quartet. Dessner’s other ﬁlm score credits include The Two Popes, which won Discovery of the Year at the World Soundtrack awards; C’mon C’mon (2021) directed by Mike Mills and Cyrano (2021), the major musical by Joe Wright.

Also active as a curator, Dessner is regularly requested to program festivals and residencies around the world, at venues such as at the Barbican, Philharmonie de Paris, and Hamburg’s Elbphilharmonie. He co-founded and curates the festivals MusicNOW in Cincinnati, HAVEN in Copenhagen, Sounds from a Safe Harbour and PEOPLE.

Over the past ten years, David Chalmin has assumed an increasing number of roles: as a producer, arranger and sound engineer alongside some of the most respected indie figures worldwide (The National, Shannon Wright, Richard Reed Parry, Efterklang...); as a contemporary music composer, having founded the Dream House Quartet with Bryce Dessner & Katia and Marielle Labèque (who hosted Thom Yorke on stage in 2019); and as a mastermind of dense, heady electronica with his album La Terre Invisible in 2019.

The sixth movement of the piece Sept Particules, composed in 2018 for harpsichordist Justin Taylor and his ensemble Le Consort, was sung to critical acclaim. And now, his soft, sensitive voice has become an integral part of all five tracks on Innocence, EP to be released on Yotanka Records on the 17th of June 2022.

In 2022, he is also working on Electric Fields, a new project for Barbara Hannigan, Katia & Marielle Labeque with live videos by Netia Jones in which he’ll perform live electronics. This work, co-written with Bryce Dessner will be premiered in November 2022 in Disney Hall, Los Angeles.

Among his other compositions : a piece for organ Constellation premiered at Variations Festival Nantes, a piece for 100 pianos, Piano Orchestra premiered at Paris Philharmonie, a ballet Star-Cross'd Lovers for two pianos, drums electronics and guitar created at the Cité de la Musique in Paris (recorded for Deutsche Grammophon), an original music for Madonna's short film Her Story filmed by Luigi & Iango.

He also created with pianist Katia Labèque, a project on Moondog’s music premiered at Les Nuits de Fourvières in Lyon. The Moondog album was released by Deutsche Grammophon.

With the trio Triple Sun, with bass player Massimo Pupillo (ZU) and drummer Raphaël Séguinier (UbuNoir), he joined the Dessner brothers (The National) and Justin Vernon (Bon Iver) for the project Invisible Bridge at the Paris Philharmonie.

“David Chalmin’s music has the clarity, confidence, and self-evidence of works that have matured over time, reflecting experience that is unencumbered by outside in- fluences and perspectives... a glowing melody and haunting electronic waves...”
—Vincent Théval (about Innocence)