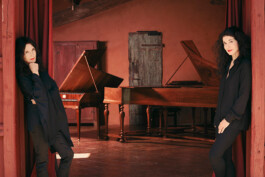 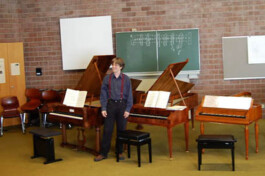 Fortepianos used for this Mozart concert are made by Paul McNulty, who is one of the most highly respected builders working today.

The instruments modeled after the instruments of A.Walter (1752 - 1826) and are the result of his long research of the originals, and particularly one ca.1792 Walter instrument which builder had on restoration in his workshop.

Anton Walter, who had the title of ´Chamber Organ Builder and Instrument Maker´ in Vienna, is considered to be the most famous fortepiano maker of his time. He improved the so called ´Viennese pianoforte action´, which became a standard for many years. He built about 700 instruments, which were praised for their quality by both Beethoven and Mozart, who purchased a Walter instrument around 1782. According to Mozart´s son Carl: ´Most remarkable is the wing-shaped Pianoforte for which my father had a special preference to such a degree that he not only wanted to have it in his study all the time, but exclusively used this and no other instrument in all his concerts, regardless of whether they took place in court, in the palaces of noblemen or in theatres or other public places´.

Katia and Marielle have been regurlarly performing on fortepianos since 2000. They have toured with Baroque music ensembles such as Age of Enlightenment and Simon Rattle , Il Giardino Armonico with Giovanni Antonini, Musica Antica with Reinhard Goebel, Venice Baroque with Andrea Marcon. Their concert with Il Giardino Armonico at the Musikverein in Vienna was broadcast in Mondiovision.

The Bach year 2000 was a high point for those admiring the original sound of period instruments. Three years ago, Katia & Marielle commissioned the building of two Silbermann forte pianos in order to participate in the Bach celebrations. One of the Silbermanns was built in Milan by Andrea Restelli, the other instrument was built by Barbara and Thomas Wolf in Washington. The instruments are copies of the same instrument built by Gottfried Silbermann in 1746 in Sanssouci, but each with its own unique character and colour. The sound of the Silbermann forte piano could be placed somewhere between the cembalo and the piano and it is the only forte piano Bach knew. 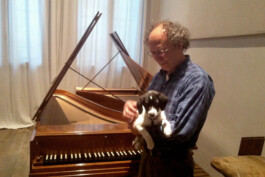 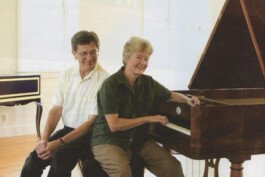 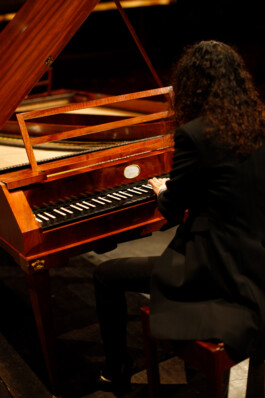 About the Silbermann fortepianos and his cooperation with Katia and Marielle Labèque, 1998

How often in the early seventies did we hear this allegedly significant argument enunciated by conservative guardians of the Holy Grail of good taste when, owing to the uncommonly gifted Gustav Leonhardt, the cembalo was transformed from a sewing machine into a musical instrument? And how sure of himself was the critic of the “Fränkisches Tageblatt” when he wrote on the occasion of a performance of one of Mozart’s pasticcio concertos on a cembalo: “Mozart no longer even knew the cembalo.”

We would all live in a golden age if people only talked and wrote after having re- searched and elucidated their subject. A glance at the store of musical instruments of an present theatre or radio station would teach us that not every institution bought reproductions of historic cembalos in 1970, or reproductions of Stein fortepianos since 1990. And so we are justified in presuming that not everybody in 1780 suddenly owned a Stein fortepiano...

No, the invention, introduction and general acceptance of new keyboard instruments was always a historical process which, faster at times and slower at others, was ever influenced by numerous details and finally resulted in the changes we see today. Many an aged virtuoso and composer still played the cembalo when the upcoming generation had already accepted the tangential piano and was eagerly awaiting Stein’s fortepiano. Letters, private records, bills and compositions dating from the second half of the 18th century show time and again how slowly the cembalo went out of fashion. A detailed scrutiny of an instrument built by Taskin in Paris disclosed the fact that the original cembalo was first transformed into a fortepiano and later back into a cembalo.

W.A. Mozart certainly did not have problems with the cembalo on which he learned to play until his father acquired a tangential piano by Späth. During his first years in Vienna he undoubtedly still played on the cembalo, at a time when Countess Thun’s Stein piano was not available and his own instrument had not yet been delivered.

But “what about Bach???” Like Mozart, Beethoven and Schubert he certainly did not yet know the “modern piano,” but being the offspring of a family of organists and cembalists he must have kept himself informed on Cristofori’s and Silbermann’s efforts to enliven the rigid sound of the cembalo. We can hardly think that he was first confronted with Silbermann’s fortepiano during his visit to Potsdam in 1747. As a respected authority on musical organs, he must have followed the early development of the instrument, and commented on it. The “infancy” of the new instrument, which Antonio Lotti and probably also F.M. Veracini brought from Venice and Florence to Dresden in 1719, thus was directly witnessed by Bach himself.

In 1732 Gottfried Silbermann was able to present a functioning “piano-fort” to the Saxon court in Dresden and to the “musical world” at large. It is hardly astonishing that the “Collegium Musicum” at Leipzig, an ensemble conducted by Bach, announced already in 1733 a concert “with a new clavicymbel, of a kind which has not yet been heard here”. With due caution, we can assume this instrument to be identical with Silbermann’s invention shown in Dresden. But as none of the cembalo concertos arranged in those years by Bach for himself and his sons show clear traces of a new “piano-et-forte” culture, some prudence is called for. On the other hand, we cannot really expect to find hints of the new instruments in the scores. Bach and those of his sons who played the concertos, had no reason to hand down to posterity their way of dealing with the new musical medium. This posterity is still assiduously and vainly searching in the “Ricercar a 3” of the “Musical Offering” - which, according to the sources, was first extemporised in 1747 and only printed later - for proof that this composition was solely written for the “forte-et-piano”.

This proof will not be forthcoming, just as there is no proof that Mozart’s late concertos were never played on cembalo. In the case of the concerto for three “pianos” KV 242, we fortunately possess the irrefutable proof that its version for 3 keyboard instruments was always played with a mixture of cembalos and fortepianos, and that it was originally written in Salzburg for 3 cembalos. The countess Thun - who was on friendly terms with Mozart but also with his often and wrongly reviled competitor Ignaz von Beeke - did not own three pianofortes by Stein, and the Lodron sisters and their aunt in Salzburg could only dream of it. We have a “sonata for two pianofortes and a cembalo” by Ignaz von Beeke, which definitely complements Mozart’s concerto and which therefore allows us to infer the original set of instruments.

Not satisfied with this heterogeneous mix of two fortepianos and cembalo, Mozart later rearranged the concerto for two pianos. But it seems that originally it was a concerto for three cembalos which, after Mozart’s early but only partial turning away from the old instrument in Vienna, could - under the new circumstances - no longer be performed adequately.

The question of the historically correct employment of the cembalo and the fortepiano is still open to discussion. After almost thirty years of performing in concerts and studying the sources, we still break new ground every day...

But we are happy to have found in Katia and Marielle Labèque two virtuosos of the “Steinway” who, by exploring the potential of the “Stein” and especially the ”Silbermann”, wish to contribute to the “quest for time past”.

With Reinhard Goebel one never knows if he is joking or speaking in earnest. Possibly he does both at the same time. So he spoke - as if incidentally - the almost inane sounding sentence: “pianists are called pianists and not forte-ists.” A distressing truth. On the stage of the giant Kasseler Stadthalle sit two women with their backs to the empty house, they play on ancient-looking instruments that sound like a mixture of a cembalo and a piano. And outside in the hall Reinhard Goebel, the violin virtuoso and founder of Musica Antiqua Köln, is practising. Although the doors are closed, one hears him with at least the same intensity as the pianists, a situation that could turn into a nice mess.

But the highly ornate instruments played by Katia and Marielle Labèque, the world-renowned piano duet, are very special. They are reproductions of the fortepianos known to Bach, and for which he may even have composed some music (the experts have been discussing this point more and more often and more and more violently). Fortepiano? The entire early literature for pianos suffered from the cembalo as well as the fact that its volume of sound could not be varied. But in 1698 Bartolomeo Cristofori succeeded in Florence in building an “arpicembalo che fa il piano e il forte”, a harpsichord capable of playing forte and piano.

This instrument fulfilled the age-old dreams of musicians, but in no way did it become an instant sensation. There were good reasons for this. The change from the cembalo to the forte-piano was not only technically difficult, but the new instrument was not yet sufficiently reliable and loud enough. Cristofori’s instrument was in any case brought to Dresden in 1719, where it was copied and developed by the famous organ-builder Gottfried Silbermann. Bach, who came to know Silbermann’s instrument in the thirties, had some objections: “it is not loud enough in the higher positions and difficult to play.” But he liked its sound and played it in concerts - certainly for Frederic II in Berlin, but presumably even earlier.

Of the Silbermann pianos of Bach’s time, only three have survived, and not one of them can be played anymore. But in the meantime four reproductions of these exceptional instruments have been built - two of them are owned by Katia and Marielle Labèque. A phenomenon, a sensation. Traditional musicians only rarely take up old music, so why the Labèques, of all people?

Everything began in Munich, where the pianists met the bassoonist Marco Postingel, a member of the Bayrischer Rundfunk orchestra, who was able to fill them with enthusiasm for baroque music. Before this meeting, they thought baroque music was, in Katia’s words, “antiquated”. They now became acquainted with Reinhard Goebel’s legendary recording of the Rosenkranz sonatas, a masterpiece of the composer and famous violin virtuoso Heinrich Franz Biber (1644-1704), who for a long time was employed at Salzburg. This recording is galvanising. As usual, Goebel attacks with the attitude of a general and confronts his audience with a radical vehemence and tremendous tempi. The audience is at first bewildered by his extreme and unorthodox play, but the great music historian Goebel (of whom Katia says: ”he is all books and notes”) is able to appeal to a number of sources which endorse his interpretation, at least as a historical possibility. But above all things, this drastic approach inspires the listener to commit himself to a bacchanalian exuberance. So the pianists just rang up Reinhard Goebel.

The Labèques, began in 1997 to play Mozart with Goebel and modern orchestras. The Labèques were enthusiastic - but they wanted to play the Master. Katia: “20 minutes of Bach are like 70 years in a lifetime.” For their purpose they ruled out the cembalo and the modern piano.

So they ordered reproductions of Silbermann fortepianos. A spectacular and fairly costly undertaking. Two different lute makers worked two years each to fashion the two reproductions. The Labèques have played on their Silbermann fortepianos since last June, and now they have taken them for the first time on a concert tour, an uncommon and exciting experiment.. the sound of the fortepianos unfolds freely and without restraint. A musical world never heard before.