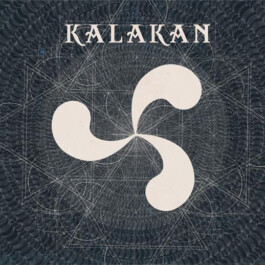 This poem by Joxean Artze opens the doors to the Kalakan universe. Children of the tradition, Thierry, Paxkal and Jamixel are, nonetheless, hybrid souls. Although they assert their Basque identities, they are also children of rock, of the world of TV, outcomes of the actual Basque Country and of tomorrow’s world.

They sing in Euskara (the Basque language) to express their overall roots, for, as the portuguese poet Miguel Torga says "the universal is the local without walls." This plural identity is based on the color, rhythm, diversity and inherent musicality of euskara.

KALAKAN (a Basque word meaning "chatting") believes that the first music is language. Kalakan chooses the essentials: percussion and voices, rhythm and melody; starting points leading to the other, to the future and eventually back to themselves.

KA: the raw and uncompromising wooden planks of the Txalaparta.

LA: the voice, a full voice, as nasal as a gaita on a jota, as sweet as a lullaby after a kiss, and often heavy, grainy, proud, generous and sincere. Moreover Kalakan usually performs live concerts without a microphone, seeking more direct contact with the public, and a simple and fair rapport with the audience.

KAN: the powerful and tribal sounds of traditional drums (atabal, ttunttun, pandero) or drums crafted by the trio (danbolero, danbottiki).

EUSKARA: the language of a people.

The Basque language has been present on this small piece of land straddling the Pyrenees for several millennia, long before the migrations of Indo-European peoples. For thousands of years it has infused other European languages and has been nourished by all of those encounters. The Basque Country is a threshold, a crossing point and also a refuge. It has been a point of departure for a nation of sailors and workers who have traveled the world and always returned to their roots.

Today the Basque language is also endangered, according to UNESCO, as it struggles to maintain the minimum threshold of speakers to ensure its survival. However, this is not the reason why Kalakan sings in Basque... Kalakan sings in Euskara because they simply cannot do otherwise; the cultural background, the choice of life, the interweaving of the individual and the social collective makes it the logical, simple and honest choice. The volunteerism and activist engagement in support of the Basque language and culture of the three Basque musicians who constitute Kalakan is also a driving force in their artistic expression.

Whether through the Ikastola (Basque language immersion schools) or cultural associations, whether doing theater or teaching txalaparta, Kalakan offers its own modest contribution to this ongoing effort to create a contemporary Basque culture... While waiting for better days, when the Basque language will finally be officially recognized in a place where it has been spoken for thousands of years.

The txalaparta is a percussion instrument strongly linked to the Basque cultural identity. The latest txalapartari (txalaparta players), founded in the 70s in the hills surrounding San Sebastián (Donostia) in Gipuzkoa, have transmitted their knowledge, and today the Basque Country has many txalaparta schools.

This assemblage of wooden planks is the only known instrument whose rhythm and melody are played by two people who must communicate silently and without looking at one another, in order to create music that never belongs to a single musician.

One player marks the rhythm, the other one breaks it, fractures it, neither mechanically nor precisely, but rather by creating something new, organic, and alive.

The txalaparta is not only an instrument, it is an attitude, a way of connecting and becoming closer to one another. When playing the txalaparta, the musician cannot be selfish and introverted, but rather must learn to let go, to listen, to communicate, to create energy. This is the primal essence of the txalaparta just as its essential component, wood, is a raw material.

The txalaparta is order and chaos, a balance between tradition and modernity, between erudite and primary blows, an improvised music.