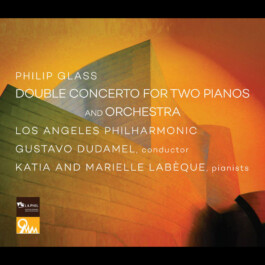 « In the double concerto I was aiming for a very different dynamic than one hears in the big Romantic-era repertoire. The 19th century concertos were kind of showdown between the orchestra and the soloists. But I saw the orchestra instead as being an extension of the piano- even more extended, because here you have two pianos. I don’t want those 176 keys to dominate. In this piece that balance is critical and difficult. I want them to blend into each other. So this concerto is not for amateurs. You’ve got to be on your toes »
—Philip Glass

Recorded during its world premiere at Walt Disney Concert Hall in Los Angeles in May 2015, Glass' Double Concerto for Two Pianos and Orchestra was composed for soloists Katia and Marielle Labéque in the fall and winter of 2014-15 and commissioned by the Los Angeles Philharmonic, Orchestre de Paris, Borusan Istanbul Philharmonic Orchestra, Göteborgs Symfoniker and Orquesta Nacional de España.