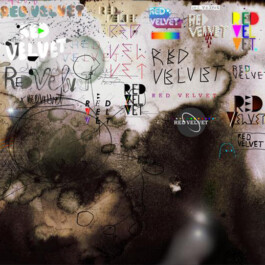 Red Velvet is the eponymous debut album from a young French/Italian duo comprised of David Chalmin (guitarist, singer-songwriter) & Reeks (drums, electronics, synth & sampler), a stirring and eclectic mix of styles that incorporates such elements as the fiery thrust of modern indie-rock, the shifting tempos and melodies of post-rock and the complexity of contemporary electronic, all with a distinctly personal slant that comes from years of close collaboration between Red Velvet’s two protagonists.

Influenced by groups as diverse as Sonic Youth, The Smashing Pumpkins, Radiohead, Led Zeppelin and Aphex Twin, it was at Brancaleone in Rome, where they meet to rehearse and record, that Red Velvet found its sound, discovering a rare common ground between opposites; analog and digital, rock and electronic, live and sampled.

Inspired by their involvement with the band B For Bang and after several performances in European festivals (Montpellier Radio France, Ruhr, Ravello, Bremen, Ferrara, Barcelone/Sitges and more), Chalmin and Reeks decided to record their first album.

The preparation and production of the album have given the duo the opportunity to develop a new sonic dimension in their sound, delivering a dark indie rock, chaotic full of contrasts. Red Velvet is released by KML Sonic Invaders.