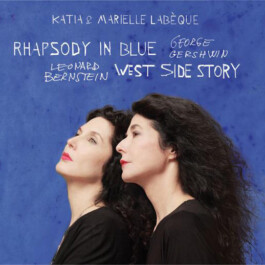 “I see fireworks when those girls play!”

The words of Ira Gershwin upon hearing Katia and Marielle Labèque's ground-breaking recording of his brother George's Rhapsody in Blue. The 1981 Philips disc of the original two-piano arrangement of the orchestral masterpiece was a world premiere and gold-record sensation - a first for Philips Classics in France - and launched the Labèque sisters's American career. But only after Ira's then assistant, Michael Feinstein, fished out a pre-promotional copy of the record from their heap of mail and brought it to Ira's attention.

Now, thirty years on, in a new KML recording, one can relive Michael and Ira's amazement at what they heard. The springiness, sexiness, noisiness and nobility of Gershwin's riotous masterpiece, jazz and classical styles jiving together as if they had never been been born apart, is summoned up in quintessential Labèque style. It was a style that reminded Ira so much of his brother's playing that he invited them to Los Angeles and insisted that they inaugurate the Gershwin collection at the Library of Congress in Washington DC on Ira and George's own pianos playing the Rhapsody. Gershwin-playing doesn't get more authentic than this.

Joining it is another rhythmic firecracker of a work, Leonard Bernstein's West Side Story, arranged for two pianos and percussion by the musical's original orchestrator, Irwin Kostal. Latino colour and capering dominate this spirited retelling of the classic American love story. But what is also able to come out in this intimate chamber arrangement is the Labèques celebrated tenderness of touch.

FEATURED ON WEST SIDE STORY