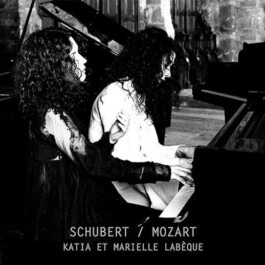 Many are the composers who have written for the intimate framework of the piano four hands. Not only were Mozart and Schubert the most prolific but they also endowed this repertoire with some of their greatest creative inspirations.

Schubert’s Fantasy in F minor ranks amongst his very finest achievements for piano, whereas theAndantino varié is one of the most exquisite sets of variations to be found in the piano literature.

Rarer are the pieces for two pianos, offering each performer greater freedom than those for piano four hands. This is particularly true of Mozart’s Sonata in D major in which the daringly virtuoso outer movements flanking a sweet, flowing Andanterepresent a real tour de force for the artists.

The source of undeniable exhilaration to pianists and listeners alike, these masterpieces of the duo-pianist repertoire are interpreted by the two most innovative artists of our time.