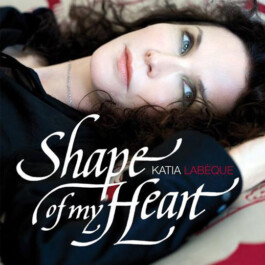 Shape of my heart

Pianist Katia Labèque is one of the most acclaimed classical musicians of our day, an artist whose breathtaking virtuosity and dazzling live performances have seen her garner respect from all corners of the musical spectrum. As well as her legions of fans across the globe, Katia’s friends and admirers in high places range from Madonna, who cites her as one of her “favourite pianists in the world”, to Miles Davis, who dedicated two songs to her on his 1985 album You’re Under Arrest (‘Katia Prelude’ and ‘Katia’).

In addition to experiencing considerable success as one half of classical duo The Labèque Sisters, Katia’s seemingly endless enthusiasm for new music has led to past collaborations with artists as diverse as Sting, Herbie Hancock and Chick Corea. Shape Of My Heart is a fascinating album that brings together a selection of these collaborations alongside brand new recordings of the music of Satie, Chopin and Radiohead.

The album opens with two of Sting’s compositions, Moon Over Bourbon Street and Shape Of My Heart; the singer’s bold emotion combining with Labèque’s refined but assertive lyricism to excellent effect. Alongside four mesmerising solo piano pieces, a dynamic version of Radiohead’s Exit Music and the compelling Purple Diamond written by producer and guitarist David Chalmin, there are piano duets with Herbie Hancock, Chick Corea and Gonzalo Rubalcaba. Labèque clearly enjoys the challenge of playing with three of jazz’s finest practitioners and whether it’s the graceful balance of emotion and technical lyricism she reaches duetting with Corea on Bill Evans’ We Will Meet Again, or the surges of rhythmic energy during My Funny Valentine with Herbie Hancock, Labèque proves that she is an adventurous, imaginative musician at the peak of her creativity.