Katia and Marielle Labèque’s attachment to their homeland is no secret. They pay tribute to their roots interpreting a repertoire gathering works by Basque composers

There are talks about my heart’s stiffness. This isn’t true. Though I am Basque and Basque people seldom confide, and in few people only. You would not believe with what regrets I left Saint-Jean-de Luz. I really felt this nostalgic impression only when I saw the ocean disappear first, then the Pyreneans. My country truly is one of the finest, the most beautiful I’d say! The sea is bordered by acacia trees! And soft green hills from the top of which fall the small balls of oaks trimmed à la Basque. And on the top of it all, the Pyreneans, magically mauve. Besides, there is the light. It is not the relentless sky of the other southern country. Here, its shine is delicate. It makes the folks agile, elegant and their joy isn’t vulgar. Dances are light, voluptuous without excess. Although very practiced, religion itself intertwines with a hint of skepticism.
—MAURICE RAVEL 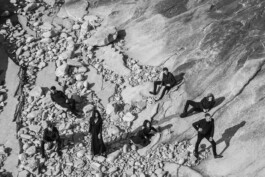 West Side Story is probably Bernstein's masterpiece. Ever since the highly favorable critical and audience reception at New York's Winter Garner Theatre on Broadway, September 26, 1957, and the phenomenal success of Robert Wise's film adaptation in 1961, this contemporary urban version of Romeo and Juliet has never ceased to move spectators and fill them with enthusiasm.

It was Bernstein who asked Irwin Kostal ( the original orchestrator with Sid Ramin of West Side Story) in 1987 to produce an arrangement for the duo-pianists Katia and Marielle Labèque. This suite of 17 pieces is the only approved and authorized version for two pianos and percussion by Leonard Bernstein himself .It includes an assortment of dances and songs, which appear in a new light. Thanks to his perfect knowledge of the score, Kostal succeeds in giving his small ensemble an orchestral fullness. The seeming monochromy of the two pianos, far from making the music dull, allows us to appreciate a harmonic language that is simple yet quite subtle, in the service of the composer's enormous talents as a melodist. Deprived of the lyric dimension provided by the voices, the songs unfold their phrases with unsuspected naturalness and authenticity.
—Max Noubel

Everyone told us that [West Side Story] was an impossible project... And we were told no one was going to be able to sing augmented fourths, as with 'Ma-ri-a'... Also, they said the score was too rangy for pop music... Besides, who wanted to see a show in which the first-act curtain comes down on two dead bodies lying on the stage?... And then we had the really tough problem of casting it, because the characters had to be able not only to sing but dance and act and be taken for teenagers. Ultimately, some of the cast were teenagers, some were 21, some were 30 but looked 16. Some were wonderful singers but couldn't dance very well, or vice versa ... and if they could do both, they couldn't act.
—Bernstein (to Rolling Stone)

Arrangement for two pianos and percussion by Irwin Kostal

IRWIN KOSTAL
(1911—1994)
was an American musical arranger of films and an orchestrator of Broadway musicals. He did the original orchestration of West Side Story. His work won both an Oscar and a Grammy Award He conducted the digital re-recording of the music to Walt Disney's 1940 animated feature Fantasia. At the request of Leonard Berstein, he did the arrangement of 'West Side Story' for Katia and Marielle Labèque. In 2004 he was named a Disney Legend in recognition of his contributions to films released by the studio.

In 2018 took place "Leonard Bernstein at 100" the world-wide celebration of the 100th birthday of Leonard Bernstein, the composer, conductor, educator, musician, cultural ambassador, and humanitarian. 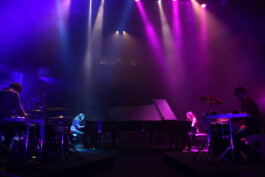 To be musically avant-garde in the 1950s meant to be difficult. Not by the end of the 1960s. That decade saw a group of American beatniks overthrow the musical givens of postwar Europe. In a series of disobediently straightforward compositions La Monte Young, Terry Jennings, Terry Riley, Steve Reich and Philip Glass declared that music could be clear, honest, pretty and experimental.

Turning their backs on the conventional centres of musical power, the earliest minimalist works got their first public audience in La Monte Young's 1960-61 Chamber Street Series in Yoko Ono's New York loft. Through the 1960s in art galleries and alternative spaces, the minimalists slowly demystified, democratised and Americanised European modernism. They rejected the angst (what Philip Glass would call "crazy creepy music"). They rejected the invisible games. They rejected the theatricality. "I don't know any secrets of structure that you can't hear," wrote Steve Reich in his 1968 minimalist manifesto, Music as a Gradual Process. Minimalism claimed that there was enough interest in the sounding process itself and enough new territory to be explored in rhythmic patterning to sustain a work. If one removed the Baroque complications - the harmonic story-telling and thematic cleverness - that were obscuring the natural beauties of rhythm and sound, what would be revealed and discovered could provide classical music with a new lease of life. They were right. Minimalism was the last great musical revolution of the 20th century. And it became the most influential and successful ism of them all. In the spirit of the loft concerts we also present new works by David Chalmin and Raphael Seguinier. 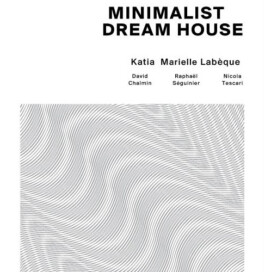 Manhattan in the Sixties. Every day, at the corner of 54th and Sixth, stood an imposing blind man with a druidic beard, dressed and helmeted like a Viking. Every day, he played music with home-made percussion instruments and declaimed poems. A simple eccentric or picturesque figure? No. Louis Thomas Hardin, called 'Moondog', was one of the true geniuses of his time.

And even one of the geniuses of all time, prolific and visionary, capable of linking Bach, jazz and Amerindian rhythms, writing mini-symphonies, madrigals, piano pieces, highbrow makeshifts… His art? A rare treasure accessible to all, as unique as it is universal. His life? A solitary odyssey strewn with encounters – from Philip Glass to Charlie Parker (to whom he dedicated Bird’s Lament, his best-known song), and from Leonard Bernstein to Stephan Eicher. This extraordinary career ended in Germany, at the heart of this Europe where he always felt like a child in exile. As time went on, Moondog's admirers would include Igor Stravinsky, Arturo Toscanini, Paul Simon, Frank Zappa, Janis Joplin, John Zorn, Sophie Calle, Damon Albarn, Jarvis Cocker, Philippe Starck, Antony Hegarty, Riad Sattouf et al.

Katia Labèque thus presents a selection of pieces rearranged with the group Triple Sun (David Chalmin, Massimo Pupillo and Raphaël Séguinier) These performances, both free and respectful, never lose sight of the author's quest for rigor and balance and demonstrate to what degree Moondog's music is also, quite simply, an appeal to constant motion.

Immense thanks to Amaury Cornut for his precious help and research work.

Some nights are the work of a genius. This one for the evening devoted to Moondog at the 'Nuits de Fourvière' [festival in Lyon], was to have given free rein to Katia Labèque in the second half, with the group Triple Sun.... Her version takes on its full meaning only after the evocation, as original as it is faithful and ambitious, of the first half with Ensemble Minisym of Amaury Cornut, 28, biographer (Moondog, Le Mot et le reste) and activist of operations for the centenary of the angel of the bizarre.
—Le Monde, 13/06/2016 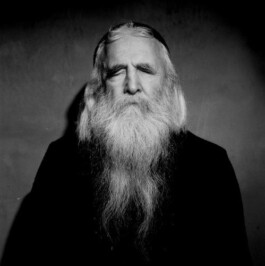 “Two households, both alike in dignity,
In fair Verona, where we lay our scene,
From ancient grudge break new mutiny,
Where civil blood makes civil hands unclean.
From forth the fatal loins of these two foes
A pair of star-cross'd lovers take their life [...]”
—William Shakespeare, 1595

Shakespeare’s timeless theme of impossible love allowed the composer and the choreographer, Yaman Okur, to play on tension and resolution, violence and harmony, antagonisms and similarities, love and hatred.

A producer of classical music as well as experimental rock, Chalmin constantly builds bridges between different musical universes. In Katia and Marielle Labèque he found allies who continuously break down barriers. As they were able to do with Gershwin or The Beatles, they continue to demonstrate that rock, Minimalism, or electronics can cohabit with classical pianos and that contemporary music can be living and close to pop music without being elitist.

In the same way, Yaman Okur shows us that break-dancing is not limited to solo improvisation or street battles but can also be written and danced by a group and have a place in concert halls alongside classical soloists. His numerous experiences with Madonna or the Cirque du Soleil have enabled him to develop a professionalism and rigour that complement his visionary talents, making him a veritable contemporary choreographer and not simply a B-boy trained in the street.

The result of Chalmin’s encounter with Okur is a topical work based on universal, accessible themes, which, for all that, is never facile. Experimentation is of the essence, and we fluctuate between amorous dances accompanied by two romantic pianos inspired by Schubert or Chopin, and rock explosions illustrating gang wars by way of Minimalist electronic celebrations that could bring certain Berlin parties to mind… 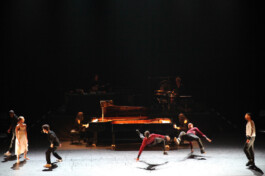 This project has been presented in its concert version as a co-production between WDR Köln and KML on the 24th of May 2014 in Köln. It includes arrangements of Herrmann's music by Nicola Tescari and David Chalmin.

First came the razing of genre walls. Now come the celebrations. Experimental rockers, B for Bang, return to The Beatles for their vivid second album, exposing twelve more of the Fab Four's works to a firestorm of modern styles. Classic songs collide with the kinetic beats and bounce of the worlds of drum 'n' bass, trip hop, alternative rock and contemporary classical music to form a 21-st century forest fire of sound.

We swing from exotic tree to exotic tree, roused to a fast-running euphoria in Get Back, lulled by a trip-hop simplicity in the clearing that is I Me Mine and rushed out of a jungly reality in the infectious and offbeat tangle of When I'm Sixty-Four, to name just three. It's a kind of musical alchemy.

“An organic creature, with communicating vessels between impressionism and expressionism, poetry, the sounds of the city in the 20th century, the windrose of the band from Liverpool...”.
—Luis Martin 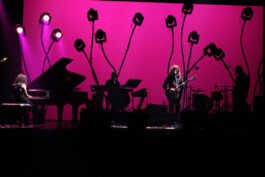